Alex Jones, someone known for his conspiracy theories that he puts on his InfoWars show, will be ordered to pay nearly one billion dollars to families of the victims of the 2012 Sandy Hook Elementary School shooting.

Alex Jones has conspiracy theories of many different instances, including PizzaGate, 5g, the September 11th attacks, and the 1995 Oklahoma City bombing.

On June 26, 2018, six families of victims of the Sandy Hook school shooting and one FBI agent who responded to the shooting filed a lawsuit against Jones for defamation against Alex Jones, InfoWars, Free Speech Systems, and his supplement company, Infowars Health, to a Connecticut Superior Court. The victims alleged that they had also fallen victim to verbal harassment, threats, and stalking as a result of Jones’ theories being broadcasted to his roughly 6 million viewers. Last year, a Connecticut Superior Court judge ruled that Jones was liable for the misinformation he spread surrounding the school shooting. Today, the jury found that Alex Jones could be paying as much as $965 million as a result of the statements made on his show.

The original Sandy Hook school shooting comments made by Alex Jones in 2015:

“The whole thing is a giant hoax.”

“It took me about a year with Sandy Hook to come to grips with the fact that the whole thing was fake.”

Alex Jones has stated he believes the Sandy Hook shooting is “100% real”,

Alex Jones, before the trial started, attempted to clarify his comments on the Joe Rogan Experience,

Some have speculated that the court’s decision to award the families nearly one billion dollars is political, and an attempt to silence and limit Alex Jones. 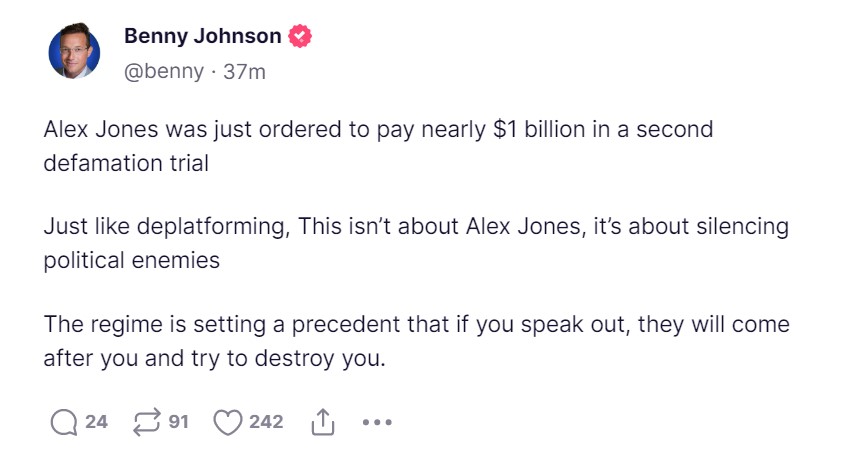 Alex Jones has done multiple interviews since the controversy arose. In some, even early in the controversy, he’s been apologetic and understanding. At other times, Jones has been stubborn. While not doubling down on his claims entirely, he’s refused to apologize on multiple occasions – including in court where he said

which is in response to believing the media won’t allow him to live the controversy down, and would rather keep it alive for their own benefit.

Today, the trial that included three cases awarded the victims $965 million. The $965 million will be shared between 15 plaintiffs, with their awards ranging between $28.8 million to $120 million.

Of course, one billion dollars is a large lawsuit. Either way, Alex Jones likely will not be paying it due to the fact that he has an estimated net worth of roughly between $135 million – $270 million. Having a conspiracy show and selling supplements can get you rich, but not quite a billionaire.

wpDiscuz
0
0
Would love your thoughts, please comment.x
()
x
| Reply
You are going to send email to